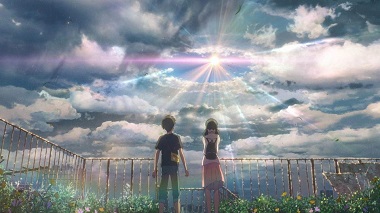 If you were to pick from a list of top 10 worst self-inflicted ways to watch Weathering With You I might have accidentally picked the worst one by accident. I also picked the one that most seemed like something out of a mediocre sitcom. If you did not already know Weathering With You involves a Tokyo that is besieged by constant rain therefore falling and flowing water is a constant visual metaphor throughout the movie. Since Weathering With You was the last event at Anime NYC I was running out of steam and only had a small breakfast. Therefore to wake myself up to properly review the movie I got a quick coffee. Getting the coffee took much longer than I anticipated, therefore, I then forgot to go to the bathroom since I had to sit in the back even with my guaranteed press ticket. Anyone well versed in my Zetsubou-Sensei like fortune would realize the obvious outcome. I spent most of the movie in absolute discomfort since I could not leave the theater and get back in but I also did not want to miss out on what could have easily been the highest-profile premiere at the convention. So I suffered through the aquatic film and still had a wonderful time which is quite the accomplishment. If that is not a major endorsement of the film I’m not sure what is.

END_OF_DOCUMENT_TOKEN_TO_BE_REPLACED 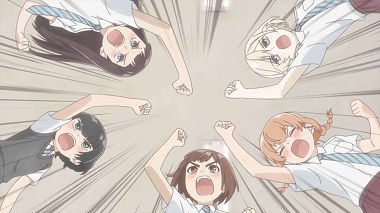 One of the main problems with no longer doing the APBs every season is that it is a bit easier for new shows to fall in between the cracks. Thankfully in this age of the Internet, there are also more than enough people going out of their way to tell you what you’re missing on to balance it all out. Last season the show I slept on was O Maidens in Your Savage Season.

I’m actually a little surprised we missed this one. It really seemed like something that would be a Reverse Thieves title. I wonder if it was a case where we saw the little blurb on the seasonal chart and wrote it off as nothing more than a basely pervy comedy. It used to be that the low down sex comedies would be a cast of all girls except one guy but now the pure all-girl formula is increasingly common. If that was the case I’m sorry I wrote this show off so quickly for while it definitely revels in sexual comedy it does so in a brilliantly clever and thoughtful manner. It is a proper dramatic comedy with sex and not just a dumb fan service romp.

Although it might also have just been that it was on HIDIVE and I just forget to look there at times.

END_OF_DOCUMENT_TOKEN_TO_BE_REPLACED

I saw Penguin Highway in theaters during the New York Int’l Children’s Film Festival. I was sitting next to two women in their late 20s who were discussing where to get artisanal haircuts. If that does not paint a picture of who was sitting next to me I’m not exactly sure what will. After the movie ended one of them commented that the story distinctly had the feel of what she expected from one of those “Japanimation cartoons”. Before I say anything else I do have to address the elephant in the room: I’m just as shocked as you that anyone still says “Japanimation cartoons” let alone two young women. But it does give you a sense of how Penguin Highway feels very different when your baseline for anime is just seeing Ghibli movies and Adult Swim shows. That said I would argue that Penguin Highway falls into that realm of your stereotypical “anime” either.

That is a fairly weighty statement to make so I think it requires some justification beyond “Penguin Highway gets lots of critical praise so it has to be different.” Let us see if I can back up my claim.