Don’t worry I am still able to podcast and the latest episode of Oldtaku no Radio. I went on with @QX20XX and we talked about the famous/infamous series, Higurashi When They Cry. The series is best known as the horror/mystery series where cute girls murder each other is grizzly ways. I came on the show as someone who watched the series in the past but also played the original visual novel. It is definitely a podcast where three of us found it thought provoking and fascinating and one of us would have rather watched Wild Cardz on loop 50 times rather than watch Higurashi again. Listen to the episode to find how who is who.

Listen to Oldtaku no Radio #037 – Higurashi When they Cry 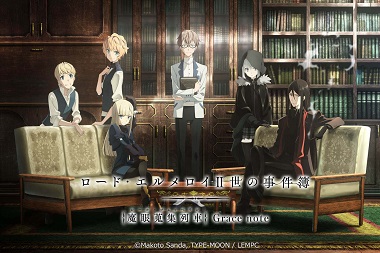 The Lord El-Melloi II Case Files is such an odd show because it mainly seems to be a show whose audience is pretty much me and maybe a dozen other people. It is a mystery show set in the Type-Moon universe in which lore and magical systems are used to solve crimes. The Type-Moon name is solid enough to sell quite a bit but damn if that does not seem to be a pretty niche pitch to someone who is not me.

I remember discussing the show with my roommate and both of us realize that while everything about this show should make it the one entry that Kate might have liked in the Type-Moon universe there was no chance in hell she would ever enjoy it. It has magic, mystery, style and even an extended case on a train. Even the handsome, nerdy, and snarky detective would not win her over. The fact of the matter that all the solutions revolve around lore and magical systems pretty much makes this one DOA for Kate.

The thing is I would have assumed that would be the case for many people. There is a bit too much magic for the mystery people and not enough action for the Fate fans. Then again this is a fandom that has sat through some long lore dumps and explanations of magical systems with nothing more than a nice pair of Tohsaka legs to help them along so a little scene or two of deductive reasoning is not enough to turn them off.

With that said this is still a story that is seemingly tailor-made for me. The question is did I love it? The obvious answer is of course I did otherwise this post would undoubtedly started very differently. So really this is just an examination of why I did. Let’s go! The game’s afoot!

WARNING: I will drop some spoilers for the show so you probably want to watch the whole thing before you read this.

END_OF_DOCUMENT_TOKEN_TO_BE_REPLACED

Based on the ongoing novel series, Holmes of Kyoto brings Holmes into the modern era as a young graduate student and apprentice in an antiques shop.

Aoi has only recently relocated to Kyoto. When we first meet her she is skulking outside the Yagashira antique shop debating whether to go in for an appraisal. There she meets Kiyotaka (aka Holmes) who not only reveals much about the items she brings in, but also reads her intentions like an open book. Before Aoi knows it, she has agreed to work part-time at the shop and hone an eye for antiques. Together they find themselves wrapped up in minor mysteries around the Kyoto area.

The Holmes of this story possesses many qualities that have become a staple of the character like being able to read deeply into tiny details of a person’s demeanor, words, clothing, and other attributes; a penchant for being aloof; and not always being completely tactful. Kiyotaka is far less abrasive that some versions of the character. He does have a teasing streak, but is often kind and shows himself to be vulnerable early on.

Both Aoi and Kiyotaka are dealing with loses of love and form a bond over it. While Kiyotaka is further along in his recovery, and has wisdom to share on the subject, it is still clearly a painful piece of the past.

So far the mysteries they’ve encountered have been family affairs where Holmes is brought in to quietly decipher the answer. He gets to the bottom of things, but not without dredging up some family troubles or secrets along the way.

What I enjoy most in the series is the interjection of bits of history whether it be on the intricacies of antiques like pottery and paintings, or on Kyoto’s traditions like the Saio-dai chosen for the Aoi Festival or the Tengu spirits of Kurama-dera.

I initially started watching the anime for this, but I’ve put it aside in favor of the manga. Both are adaptations, but I found the pacing and artwork in Ichiha Akizuki’s version a better matched to the atmosphere of the series.