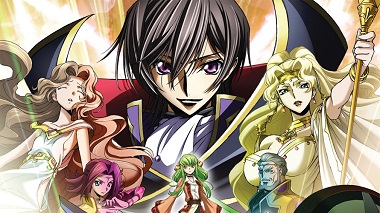 I already mentioned that I had the most uncomfortable viewing experience for Weathering with You but I possibly had the most “authentic” viewing experience for Lelouch of the Re;surrection. I say “authentic” because it was sort of the worst seats in the house but there were be no set up that could be envisioned as more Code Geass that I could think of. First of all the music in the room was just a tad too loud. They raised the volume to counteract a potentially noisy crowd but it mostly only made the crowd louder to compensate. To the right of me was a vaping CC who pretty much smoked her little device the whole movie. Behind me were a row of rowdy fujoshi. They had seen the movie before (a fact they mentioned several times) so they mostly just shouted various comments at the screen with an emphasis on anything hot or to do with their fan fiction. It was not full MST3K but it was a fairly wordy unwanted commentary track.

Overall I still experienced the movie fairly well it just was probably the best encapsulation of the Code Geass fandom in a single solitary moment. If anything I probably would have enjoyed a little more had they not been there but such is sometimes the price of going to a live screening.

By the way, there are going to be some MAJOR spoilers for the Code Geass and the compilation movies but truth be told you should not have anything to do with this movie if you have not seen those.

END_OF_DOCUMENT_TOKEN_TO_BE_REPLACED

Ongoing Investigations: Voltron Legendary Defender by Dreamworks, Kubo and the Two Strings by Laika, and Code Geass: Akito the Exiled by Sunrise.

Food for Thought: What is the most important thing for Otakon to get right its first year in D.C.?

And now your helpful bartenders at The Speakeasy present your drink:

Pour into an old-fashioned glass half-filled with broken ice, and serve.

The story in the Mushishi Special of a girl who can’t go into the sun and the eclipse which takes a toll on her family and her town, and her selfish wish for the sun to never to return, fit perfectly in the world of Mushishi.

I rather enjoyed the beginning sequence of little stories and tidbits about the upcoming eclipse being talked about by various people. Various people that don’t include Ginko, though he is mentioned but not by name. There was a feeling of anticipation for him to show up on the screen. It has been so long since last we met our wanderer that I felt my heart swell as he stepped into view.

The Mushishi Special does the trick of making one very excited for the upcoming new ongoing anime. This double episode filled me with good feelings but, as Al pointed out to me, made me forget the melancholy that generally underlies much of the series.

The Mushishi Special is sort of herald for the new Mushishi anime. The original anime covered lots of the manga but at the same time it also left a decent amount uncovered. But Mushishi is really episodic. There is not really a beginning, a middle, or an end. There are no real story arcs or many connecting threads. It is mostly just Ginko going around Japan and helping people with their spirit problems while researching said spirits at the same time. There are some reoccurring characters but no one who need more than a breif introduction.  So it is a story that can always be restarted with minimal fuss and ended with little sense of abruptness.

The special starts during a Solar Eclipse. The Mushishi are on high alert as the spirts are extremely active during a large natural event like an eclipse. In fact some of them can only act on such a day. In one town a huge Mushi uses the darkness to block out the sun in the area permanently.  While Ginko tries to free the town from endless darkness there are two girls in town who might have a solution but little desire to tell anyone about it.

I was a little shocked that overall this was not that melancholy a story. It really felt like it could easily go down the road to a sad or bittersweet ending. Mushishi as a whole like to go that way. But surprisingly everyone gets what they want it this episode. It is certainly not the way the originally wanted it but in the end they might have actually gotten more of what they needed than what they wanted. (And not at some horrible price.) I sort of figured they would go for the gut punch with this one. Color me surprised.

Overall it was more Mushishi. It was slow but pretty. Thoughtful but not overly ponderous.  Subdued but not comatose or completely morose. It is not an episode that would win anyone over who was not already predisposed to the series but a nice treat to its established fan base. I am sure they are just itching for the new season on the way.

The Ongoing Investigations are little peeks into what we are watching, reading, or playing outside of our main blog posts. We each pick three things without much rhyme or reason; they are just the most interesting things since the last OI.