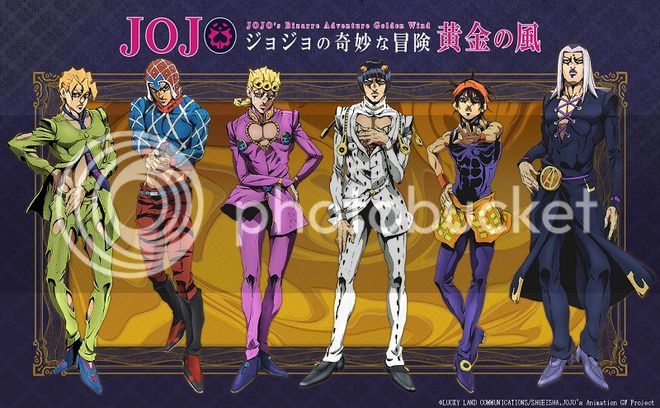 Bear with me for a second. The simple answer to this question is Giorno Giovanna is the main character of Jojo’s Bizarre Adventure Part 5. He is the Jojo of the arc. The story begins with him and it ends with him. His story kicks off the arc and his plan to be a Gang-star is at the heart of the story. His origins also marks him as someone who would have to try not being the main character of this story. So objectively the answer is simple. Giorno is the main character. Done and done.

But here is my … thought experiment. I always got the feeling that Giorno Giovanna was always supposed to be the main character of Golden Wind but somewhere along the way Bruno Bucciarati essentially takes over the protagonist role and Giorno Giovanna sort of falls into more of a point of view character position. Giorno is never inconsequential but his role often has the same weight as Mista or Narancia. All the members of the gang have time to shine but Giorno rarely stands out more than any of the others. The thing is Bruno Bucciarati takes charge when everyone is together and just feels more like the center point of the story.

So here is the deal. I’m going to lay out my case without using any information past episode 17 (Baby Face) and I would like everyone to not only examine what came before this point but watch the show with this idea in their heads. When the arc ends I will write a follow-up post and see what other people think.

Giorno Giovanna could not start with more weight as the main character. He is the son of Dio Brando who was conceived with the body of Jonathan Joestar. He is essentially a Brando mixed with a Joestar containing aspects of both families. While he is easily the Jojo who walks the darkest path the inherent call for justice still rings in his heart. His life on the streets and dream of toppling the corrupt  Passione are all the foundations of a shonen hero. They even have Koichi and Jotaro essentially pass the torch to him at the beginning of Golden Wind.

The problem is I feel Giorno has two major problems that make him troublesome as the main character. The first is he is sort of oddly milquetoast. Despite his insane backstory, distinctive appearance, and ambitious dreams he does feel sort of flat especially when compared to previous Jojo’s. Joseph, Jotaro, and Josuke immediately eat up the scenery the second they enter the story and refuse to let the audience drift away from them. The rest of the cast plays off of them excellently but at the same time, the Jojo is always the tent pole. Giorno feels much like Jonathan which is dangerously close to an insult considering how Jonathan is almost always cited as the most boring Jojo. Giorno and Jonathan do a serviceable job as acting as the center of the story but they never rise above doing just what they have to. A common complaint about shonen manga is the main characters often feel flat and all the excitement comes from supporting cast. Despite having all the momentum in the world Giorno feels sort of plain and only occasionally gets those Hirohiko Araki moments of insanity. The problem is Giorno needs more of them to feel like he should be more than just another member of the gang.

His second problem is his Stand is unbelievably complicated. It feels like the Rube Goldberg version of a Stand. Take Jotaro and Josuke as Stand Users. They have fairly straight forward Stands that are easy to explain but can be used cleverly in many situations. Star Platinum punches things really fast and Crazy Diamond fixes things. Everything else is an application of a simple idea. Gold Experience theoretically is just a Stand that infuses things with life energy. In practice, it is a stand that:

They all sort of fall under the same umbrella but they always feel like separate powers more than the application of a single power. It does not help that at points Araki seems to ignore certain parts of Gold Experience because they just make situations too complicated.  This means that Giorno seems to fade into the background unless there is a threat that is designed for him to interact with. Otherwise, Giorno is either disabled, occupied, or just outright overlooked. On the other hand, Sticky Fingers makes zippers in things. It is a far easier power to plan around.

At the same time, Bucciarati goes from feeling like side character to a far more central pillar of the plot as time goes on. Bucciarati starts off looking like a villain but is quickly won over by Giorno’s mixture of righteous ambition and sly cleverness. So it seems as if Bucciarati is going to be Caesar to Giorno’s Joseph. Bucciarati will be the more experienced gangster but slowly begin to defer to the talented newcomer who becomes the leader.  The thing is as the story goes on everyone’s story begins to revolve around Bucciarati. He is the one who sees greatness in the members of the gang and by showing them acceptance and drawing out their overlooked potentials. He also always seems to be the man with a plan that everyone looks to for guidance. Giorno sticks out as the dude who always looks at things from a very … unique perspective. Giorno always stands out as more than just a new recruit but at the same time often seems to take a back seat to Bucciarati. Giorno mainly seems to have fallen more into the role of capable if somewhat odd second in command. Bucciarati seems to be falling into the wise mentor spot while getting the attention of a protagonist. Sort of the Red in a sentai team. Giorno feels more like a Blue.

My guess is that Giorno was always meant to be the main character of Jojo’s Bizarre Adventure. But Giorno’s weird and sometimes bland personality and very convoluted Stand made it a bit difficult for him to be at the forefront.  I wonder if he just decided to minimize Giorno to make his life easier. It just makes sense for everyone to follow Bucciarati and he does not require as much plot massaging. You don’t throw away Giorno but you also keep him in a role where you only pull him out when he is needed, fun, or interesting.

But that is my hypothesis. There is still a good deal of Golden Wind left to see and not everything I say here is absolute as the story goes on. So I am curious to see what people say after when everything wraps up.

One thought on “Who is the Main Character of Golden Wind?”