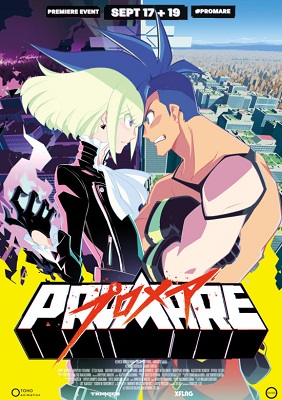 I really wanted to name this Promare: Studio Trigger Yelling – The Movie but I was a bit too lazy to figure out how to add strike-through into the post’s title. I’m trying to get back on a slightly more consistent posting schedule so I’m avoiding doing anything to give myself extra work.

If you remember a REALLY old podcast on the blog we once talked about the unusual reputation that Studio Gainax had. It seemed there was a time where the studio was able to avoid an odd amount of criticism and have its hits be more forward-facing than its flops. It had its share of detractors and more nuanced analysis but it was a bit of a fandom darling when we recorded that podcast. Since that time they have fallen far from the limelight and they are as mortal as any other studio. The thing is Studio Trigger has sort of picked up that legacy thanks to many of its foundational members being former Gainax staff. I feel like for better and for worse at this point Studio Trigger had inherited much of the old Gainax position. They have the eyes and hearts of a specific part of fandom either waiting for their next work with bated breath or watching to see them fail.

The thing is despite all their ups and downs when Gainax did a film you knew you were in for a treat. The movie itself might not have been your cup of tea but it is going to be a wonderful spectacle with amazing animation and spectacular production. With this being Studio Trigger’s first full-length film it was interesting to see if they would also revive this part of the Gainax tradition. The movie feels very Studio Trigger so the only question is would it stand beside their more beloved works or would it rank alongside their more disappointing productions.

This is an extremely random note but I just wanted to note that I was writing this right after watching the Downton Abbey movie. I would not say that Downton Abbey and Promare and diametric opposites from each other but you would be fairly hard-pressed to find two movies that are as dissimilar from each other. It really has nothing to do with anything I just thought it was funny enough to share.

30 years ago there was an incident known as the Great World Blaze where half the world’s population died after hundreds of mysteriously newly awakened pyrokinetics went on a rampage. Since then these psionic individuals have become known as the Burnish and the few of them who are left are contained by the Burning Rescue firefighters. When the brash but blockheaded firefighter Galo Thymos captures the leader of the most prominent Burnish terrorist group he finds himself learning much more about this pyrokinetics then he could ever imagine.

Don’t worry if you miss anything. Galo will surely scream about any plot points you may have accidentally missed.

I think that the first thing most fans well versed in the history of Studio Trigger and Gainax will say is, “Damn, this all looks pretty darn Gurren Lagann.” Galo looks A LOT like Kamina. And I don’t want to give away to much of the movie but the similarities do not end there. It is to the point where I don’t think this is accidental. It has to be a deliberate attempt to invoke memories of Gurren Lagann more than being a case of a bit of same face syndrome. It makes sense. While Gurren Lagann is no longer the hottest show around it is still a series that has a fandom with a nostalgic itch it that would like scratched. So calling back to that show, in particular, is a smart move.

But beyond its similarities to their previous catalog, the movie is very much a template Studio Trigger action banger. The overall plot is as simple and straightforward as its main character. If you are surprised that Lio is actually an all right dude or the main villain is who it turns out to be then I’m impressed by your lack of foresight. But that is not the reason you watch something like Promare. If you are looking for a highly original plot or amazingly narrative innovation then you’re in for a rather dull ride.

This is a template story done with lots of style and panache. The loud shonen heroes are real loud shonen heroes, the sensitive rebel leaders are real sensitive rebel leaders, and the small fluffy rodent mascots are real small fluffy rodent mascots. There is a section where an explanation for the Burnish is given and how they fit into the real plot but the movie seems to want to move on from this point as quickly as it can so it can get back to wild fights with firefighters, pyrokinetics, and robots. It is not as if the plot is bad or nonexistent. It is just as compact as it needs to be to focus on the parts the movie really cares about.

So sufficed to say the action when it hits is powerful and frenetic. The fight scenes are cool and dynamic and just really feel like Studio Trigger at its peak. There are some moments of downtime but overall the plot is very much determined to constantly be moving along. Scenes are less there to take a moment to reflect as much as they are just moments for the story to catch its breath. It is definitely has a manic sugar high feeling. It is a bit of a bucking bronco in that sense for better and for worse.

The music is unmistakably a Hiroyuki Sawano joint. If you have ever watched Kill la Kill, Aldnoah.Zero, or Re:Creators you know exactly what your getting. If anything my biggest problem with the music is it felt very much like a mixture of his soundtracks from the three titles I mentioned more than music made specifically for Promare. It almost felt like they used a collection of his greatest hits as opposed to an original soundtrack. It was still some banging music but it all feels like very known quantities to me.

Do you really like the iconic works of Studio Trigger? If your answer to that is yes then this is exactly what you have been waiting for. It is not Mountain Dew. It is a bag of the concentrate of Mountain Dew they use at restaurants. Without the soda water, this is the pure uncut caffeine and sucrose rush. Packing everything into a movie means that you’re getting an undiluted a Studio Trigger product as your going to get outside of a short film. It is a very fun if ultimately fluffy piece. In many ways, it does like up to the Gainax film legacy. The movie itself might not have been your cup of tea but it has wonderful bits of spectacle with amazing animation and spectacular production.