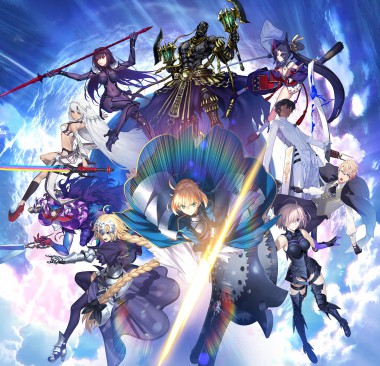 I almost always have Kate at least glance over any articles I write just to get a second set of eyes on them. She is a fairly insightful lady and while our tastes usually align we are different enough that she sees some things I would ordinarily miss. When I wrote my 12 Servants That Need To Be Added to the Fate/Stay Night Universe post I also had it look it over. While Kate might not have any real insight into the Nasuverse and Type-Moon characters she is enough of an aficionado of history and mythology that any comments she has are extremely valuable. While she generally liked the list she did have one major comment. There were hardly any women among my picks.

I thought that was a fair comment and was going to write back a simple answer for that: There are so many female Servants that I wrote up mostly male Servants to even things out. There was no way for Kate to know that as she really only knows the following Servants: Saber, Gilgamesh, and … all the other ones. It seemed an open and shut case. Then I remembered an article I recently read. It said that if a room is filled with 17 percent women the men in the room think the gender balance is 50-50 and a room with 33 percent women will be seen as having more women than men. So that study made want to actually go and see what the gender balance is in the Fate universe when it comes to Servants.

As always some basic rules:

With that said let me drop the numbers on you first: 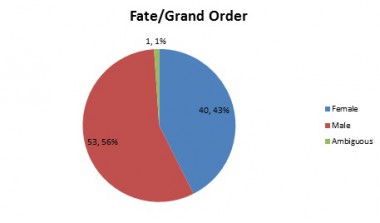 Phantom of the Opera (Assassin) – M 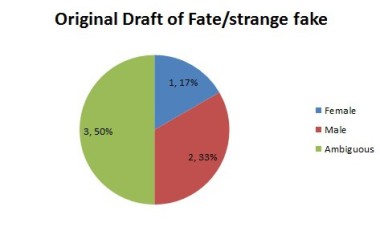 Fate/Prototype: Fragments of Blue and Silver 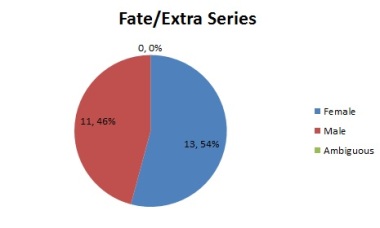 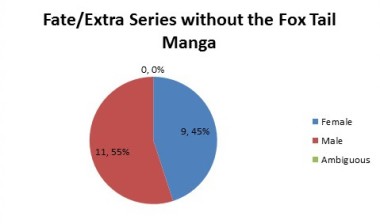 So much for the wisdom of common wisdom.

It is fairly clear that there are far more male than female Servants. 66 to 94 is hardly even a slight discrepancy or bias. In fact the only series that has more female Servants than male Servants is Fate/Extra and only when you throw in the Fate/Extra CCC Fox Tail Manga which only adds female servants. Even with the addition of Suzuka Gozen and three new Alter Egos alter the balance is only slightly in the favor of the female Servants. So it seems a fairly open and shut case.

Now there is the old saying (that I have brought up on the blog several times) about lies, damned lies, and statistics. If we look at merchandise, publicity material, and overall attention Saber alone probably gets more attention than all the other Servants (male or female) combined. And the male Servants who are not named Archer and Gilgamesh are generally ignored and even the popular ones get far less than any minor popular female character. Also the gender swapped Servants get a huge amount of focus. Since all the gender swapped Servants are female in the games it probably gets them even more attention.

I’m not saying this counters the statistics. It just explains why it could be easy to assume there are more female Servants.

What does all of this mean?

So in turn my next post will be a whole new list of historical and fictional women who would make great Servants who don’t have to be gender swapped. I hope it gets people thinking and maybe pushing for interesting new Servants in the process. I think it would help the games and the fandom in general.