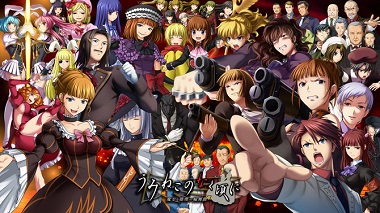 If anyone remembers all the way back in 2012 I wrote a post trying to settle my feelings on the Umineko no Naku Koro ni game series. For those who don’t remember or never experienced the series, it was a spiritual sequel to 07th Expansion’s Higurashi. Umineko was a series of eight visual novels that were divided into four question games and then four answer games. They involved a series of close roomed murder mysteries as a backdrop of the logical battle between a witch who claimed to be behind the murders and one of the victims. The witch insists that all the murders were done by magical beings but the victim insists they have mundane explanations. The spirals out into an examination of the relationship between the mystery author, the mystery reader, and the mystery itself. As the story goes on the boundary between reality and fiction get increasingly blurred.

I loved the first seven games for their mixture of fascinating logic arguments, great action, biting comedy, and a killer soundtrack. The game provoked endless speculation as I tried to solve the mysteries and decipher how to separate the fantasy elements from reality. Then the eighth game came out and while it wrapped many things up it also very deliberately left some KEY elements unexplained. Heck, the seven previous mysteries never really were given a full explanation. Many hints were left but no real answer key. The ending itself leaves much to the imagination.

At first, I was mad. I never expected every little detail to be explained in full but the ending was far more open to interpretation than most people expected.  There were all sort of accusations that Ryukishi07 either could not put a proper ending on his story or was deliberately trolling his audience. It also left some people feeling like it was thematically appropriate but that did not stop it from feeling emotionally hollow. In the game’s defense, some people loved how it deliberately refused to say many things without any certainty. The main thing was it was an ending that almost refused to provoke anything but a strong reaction.

I myself felt very confused about my feelings. On one hand, I understood why the ending was written the way it was but part of me remembered how Ryukishi07 said that riddles and mysteries without an answer always feel maddeningly frustrating in Higurashi. I eventually resigned myself to the fact that this was probably all we would ever know for sure. I enjoyed most of what I read in eight games and learned to accept that Ryukishi07 felt a need to keep some very important key answers to himself.

I secretly hoped that one day down the line he would throw the fans a bone. Give the game enough time to breathe and then release some sort of Umineko answer key. Time passed and one or two extra releases for Umineko felt like they might be the long-awaited solutions but they never came. Then last November there were two big When They Cry announcements. The first was the launch of a third When They Cry games called Ciconia When They Cry. The other was something called Umineko no Naku Koro ni Saku. It is supposed to come out during the summer 2019 Comiket.

Part of me seriously wonders if this the part of the story that contains many of the long-awaited answers. While Ryukishi07 stated he hated when riddles and mysteries did not have answers he also hated how quickly a lot of people would give up trying to find answers the second it became tough. Too many people knowing they could get the answers would just jump to the back of the book without ever trying to put in any hard effort for the answer. This might actually be a happy medium. It has been over eight years since Twilight of the Golden Witch came out during the Winter Comiket of 2010. That has given people more than enough time to throw around theories and debate answers back and forth. People can get answers if they are utterly frustrated but they were not handed to them on a silver platter as well.

The odd part is I have a weird mixture of feelings on the matter. For one thing, I have no idea what exactly Saku is going to be about. There could not be a single straight answer in the whole game. It could be nothing more than a jokey fun disc or a random side story. Or it could be something like certain TIPS that are more hints than actual answers. So I might be getting my hopes up for something that only reinforces the status quo.

Part of me is always a little worried that this will also taint my opinion of the series. Before this, my feelings had mostly settled into a comfortable equilibrium. While I felt the series had some major flaws and questionable decisions overall I felt that I thoroughly enjoyed the overall experience. I also respected the idea behind some of the more controversial decisions even if I did not agree with them. Part of me wonders if fully laid out answers might change my opinion if and when more definitive answers are given. It might have been even happier when things were ambiguous.

Now I am not all gloom and doom. Part of me is still hopeful that Umineko no Naku Koro ni Saku can toe the line between giving the audience enough answers so they don’t feel cheated, lost, or abandoned while not compromising the thematic elements that made the story so interesting in the first place. There are ways to open the cat box in a way that proves that there were answers in the first place while still giving fans something to debate and discuss.

No matter what happens I look forward to seeing what Ryukishi07 delivers this summer and I am curious how he plays with the When they Cry formula with Ciconia When They Cry.

One thought on “Standing In Front of the Closed Cat Box”