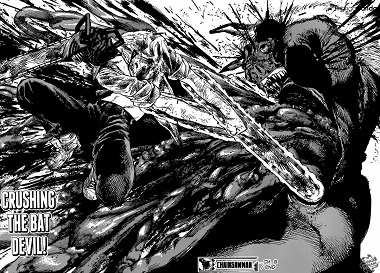 I have a theory. I think Shonen Jump has recently gotten a bit darker than it has been in a while. A more accurate title for this post would have been “Have a Number of Shonen Jump Titles Gotten a Bit Darker?” but that does not really roll off the tongue. I’m not claiming that 2019 Shonen Jump is all Young King OURs or Afternoon. Let us be realistic. I’m not even saying it is back to its peak Fist of the North Star era level of Shonen Jump. It is more somewhere between the fairly light mid-2000’s Shonen Jump and the almost seinen era 80’s Jump.

My theory began with Demon Slayer: Kimetsu no Yaiba. I will admit that Demon Slayer had mostly flown under my radar until recently. I was not really avoiding it for any particular reason. I even remember Carl from Ogiue Maniax giving it a thumbs up. What happened was I recently started using the Shonen Jump app when they changed how it worked. Now that that newest chapters are free I have started reading a bunch of titles. I saw that Demon Slayer was one of the titles you could read but there was enough backlog that it intimated me away from trying to catch up. The title was on my radar but never enough for me to add another title on to my regular reading schedule.

Then the anime from Ufotable came out. The mixture of word of mouth, impressive production values, and current positive reviews made me want to sample the series and now I could start from the beginning. The series was fairly entertaining. It is not my favorite Shonen Jump series but it is solid enough that I will probably make an effort to catch up with the manga when the anime is over. The far more interesting reaction I had was to the overall mood of the series.

I was a little surprised amount of blood, guts, and murder that was in Demon Slayer. Now Demon Slayer at its peak is a fluffy bunny panel of Berserk. But for Jump, it seemed a bit darker than I was used to. But then I looked around and realized that the median tone of the magazine had gone it the same direction. The recent batch of new titles have made me think there might be something going on.t

I think it says a little about myself that whenever I write an article like this I immediately imagine someone with a dozen counter arguments to anything I would say. Overall the modern Internet engenders that defensive mindset but I sometimes feel it more acutely than others. So I want to get some simple defenses out of the way.

The first is simply the existence of Death Note. Death Note always felt like a seinen series that got dropped in the wrong magazine. Death Note could turn the melodrama to points were it wavered between gloriously stupid and just plain stupid but the tone was always mature and dark. How well it executed that tone is still a matter of debate but it outside of the scope of this article. What really matters is that despite Death Note’s popularity it generally remained a solitary island of tone in terms of the magazine. No long running series really took after Death Note for the longest time. The next title that even comes close to assuming the mantle was The Promised Neverland and that started a decade after Death Note ended. Until then Death Note was more of an anomaly than anything else.

The other main counter would be that most action-oriented Jump series have a storyline, character, or event that can be described as fairly dark. I think of individual moments in Bleach, Naruto, and One Piece that are either creepy, disquieting, or shocking. It is not as if Shonen Jump shows are utterly unwilling to “go there.” It is just that overall these titles are mostly upbeat fighting shows for kids more in the mold of Dragon Ball than Barefoot Gen.

There is nothing wrong with this. I love myself some One Piece. One Piece can go to some meaningful places when it wants to tackle some more weighty themes. But even something like Thriller Bark which could have been darker was more The Nightmare Before Christmas than it ever was Hellraiser.

Bleach had some parts in the beginning with the disturbing and alien Hollows where it could have done something different but after a while, it mostly settled into being a much more standard man vs monstrous man fighting show. Mayuri Kurotsuchi stepped back into that original vibe but he mostly is a cul-de-sac especially as the series went on. It is not that these titles can’t do some darker moments. It is just they are very clearly the exception and not the rule.

With that out of the way I feel I can finally get to my idea. When I did my manga of the month for The Promised Neverland I generally assumed it was another dark island in the overall feel of Jump. But now with Chainsaw Man, Demon Slayer, The Last Saiyuki, and Tokyo Shinobi Squad alongside The Promised Neverland, there seems to be a little shift. Now you still have your milder titles like Black Clover, Samurai 8, and Yui Kamio Lets Loose in the magazine showing that the shift is more a change of percentage than a total transformation. But it is still a shift worth examining.

These titles tend to be a bit more graphically bloody, they have more shocking and brutal deaths, and the overall the mood is a bit more cynical and grim. Now the series still tend to revolve around the Jump trilogy of principles “Friendship, Effort, Victory” but with a bit of a darker interpretation. The death of Conny in The Promised Neverland, the introduction of Sai in The Last Saiyuki, or anything in Chainsaw Man all feels more at home in a seinen magazine.

So here is my theory. Kodansha’s Attack on Titan demanded a response. The Titan manga was popular thanks to its unique vibe and shocking elements but its less than finely polished art kept it from being anything more than an interesting oddity. Then the anime made the series a superstar and almost forced the other shonen magazines to examine if they needed to adjust their lineup to keep up with the Jones.

That said I think that Attack on Titan was just the spark that lit the kindling that was already there. It is not as if Shonen Jump has never had a selection of darker material before this date. This is the magazine that ran Bastard!! and Jojo’s Bizarre Adventure. I feel like some combination of lower circulation, changing demographics, editorial turnover, formulaic stagnation, and increased competition from other media set the stage for this shift. The bonfire was set it just needed a title to set it ablaze and I think Titan was that title. Titan’s popularity paved to way for titles that might have otherwise be rejected or sent over to other Shueisha imprints instead make their way into the pages of the flagship magazine.

Now this is just a theory. Since I can’t read Japanese and I don’t have a subscription to the Japanese version of Shonen Jump, therefore, I might be missing some vital pieces of this puzzle. The American version of Shonen Jump is getting closer to having all of the same content as its Japanese counterpart but that is still a little while off. I theoretically could be catching the middle of a movement instead of the beginning of one. I could even be wrong about this being a movement in the first place.  It could be a “Don’t call it a comeback” thing.

All that said I’m fairly confident I’m on to something. I don’t think I see the total tapestry of the movement but I think I have a decent impression of the overall concept from the parts I’m seeing. I’m very curious for anyone else’s impressions of the tone of modern Shonen Jump and how far off the base you think I am about what caused the change. This is an evolving theory so I’m all ears to criticisms and clarification.